Ghanaians have reacted to Shatta Wale announcement of retiring from music.

According to Charles Nii Armah Mensah Jr. well known as Shatta Wale, his upcoming “GOGALBUM” will be his retirement album. Adding that he has decided to start a business to create employment for those willing to follow in his footstep.

READ ALSO:  You Now Smoke Because of Me - Shatta Wale Mocks Sarkodie

“THIS #GOGALBUM WILL BE MY RETIREMENT ALBUM.
Made enough to go into new businesses and create employment for those who still want to follow the course !”

However, some Ghanaians are happy about the announcement, jubilated on Twitter. According to some of them, they are happy Shatta Wale is about to retire from music because “Asokpor noise making is going to end.”  Adding that Ghana is now going to win a Grammy award.

See screenshots of the reactions below; 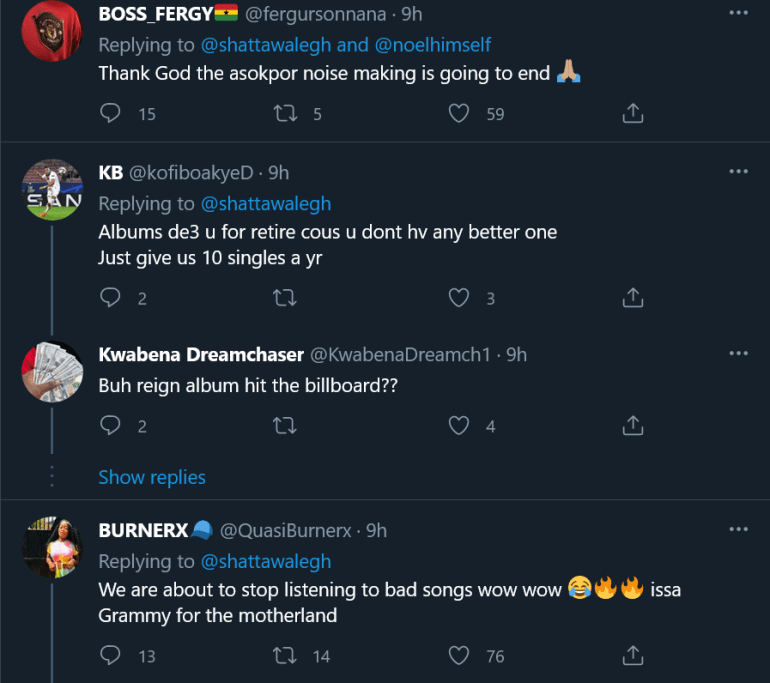 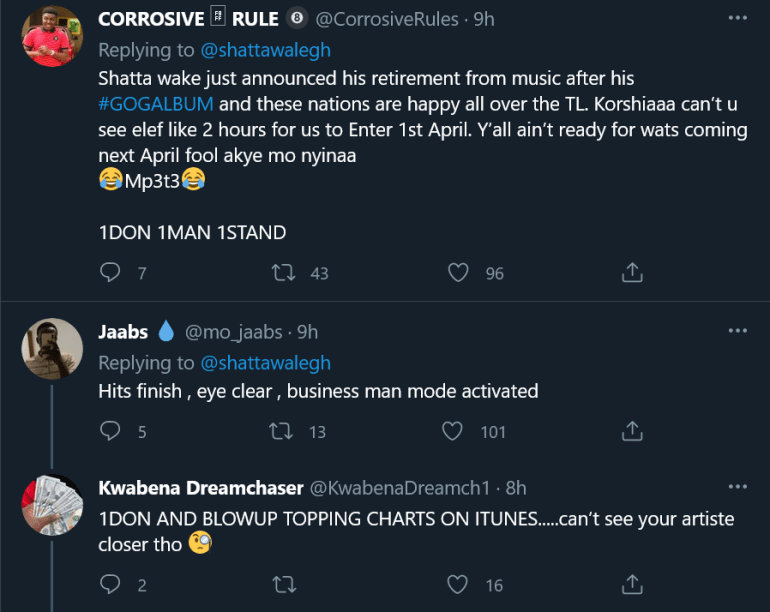 Legendary Ghanaian highlife musician, Amakye Dede affectionately called Iron Boy has opined that social media has played a very vital role in the success of contemporary Ghanaian musicians. According to the back-to-back hit maker, the new crop of musicians do not even have to record many songs to start cashing huge monies into their pockets…

Kingaziz.com has seen in a video from the past of Pastor Mensah Otabil lamenting about the speed at which so-called men of God create fear in the hearts of people by making doom/death predictions on them. The video was retrieved from the archives possibly by a fervent follower of Shatta Wale in order to confirm… 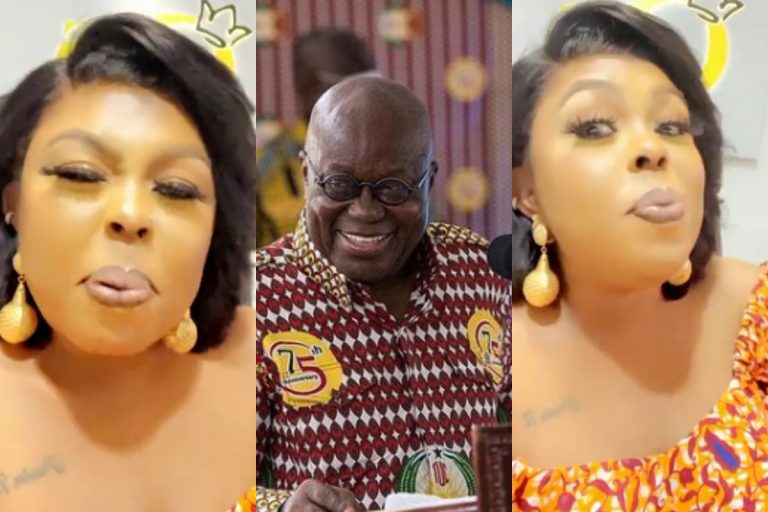 Controversial social media sensation, Valentine Nana Agyeiwaa, well known as Afia Schwarzenegger has lambasted Ghanaians in Germany who yelled at the Ghana President, Nana Addo Dankwa Akufo Addo upon his arrival at a function. A video popped up on social media in the earlier hours of yesterday which captured the moment Akufo Addo was given… 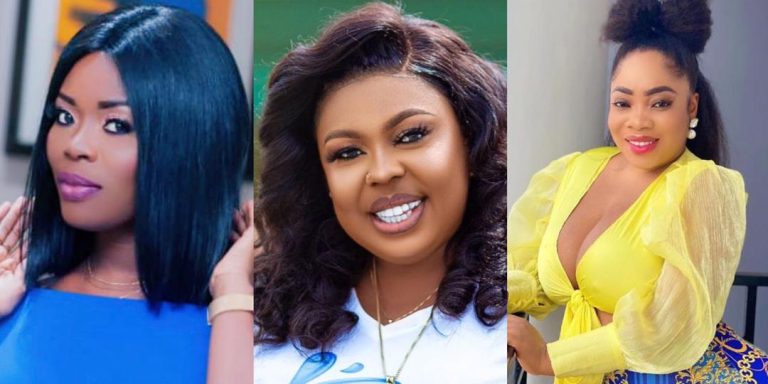 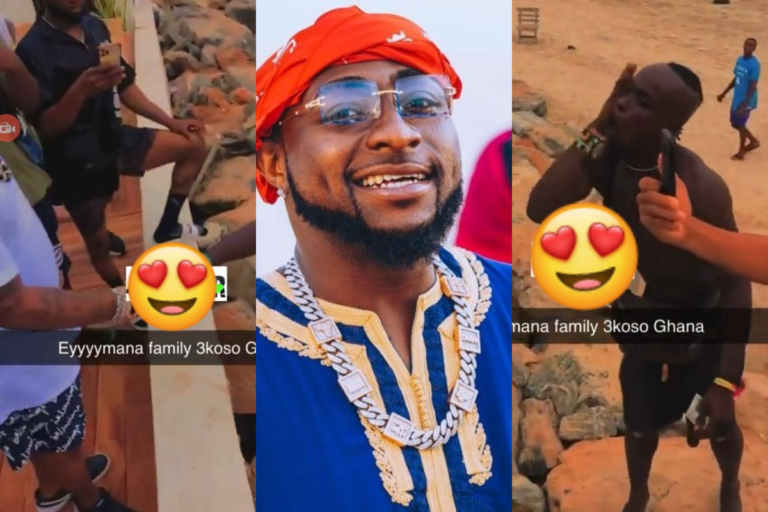 Davido has gifted Two Thoozin,  a Ghanaian internet sensation, some dollars as he enjoys himself with his team at the Labadi beach in Accra, Ghana. OBO and his 30 billion gang along with his baby mama and daughter Imade are all in Ghana for the Christmas holidays. READ ALSO:  VIDEO: Shatta Wale And Medikal Spotted… 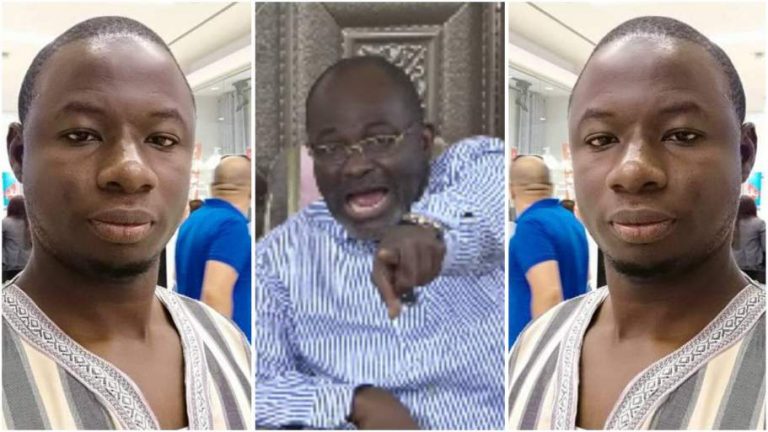 Member of Parliament for Assin Central, Kennedy Agyapong, has finally named the man behind the Killing of Ahmed Suale. Hon. Kennedy Agyapong was speaking on a US based Ghanaian radio station Adinkra TV New York where he mentioned the name of the gentleman who killed Ahmed Suale. READ ALSO:  SHS Cadet Leader Slaps His Colleague…